Recently, I published a blog on Data analytics, customer centricity, innovation. The memes we can’t seem to shake where I explored which areas of a business tend to benefit most from analytics. And charted what the analytics maturity curve may look like. Where might you be plotted on this curve?

In practice, analytics maturity rarely represents a linear curve. It can be envisioned more like a heatmap of core capabilities with certain interdependencies. Yet, there is some logic of what should be built first, which brings us back to maturity. Developing sophisticated mathematical models without clearly developed use cases or adequate data – might well be jumping the gun.

When I left PwC Advisory a few years ago, I felt most companies were well down the path of executing their analytics roadmaps and maturing their capabilities. That said, most of the clients I worked with were ASX 100 financial services providers or retailers. They were not starting their analytics from scratch, but they had other problems. Because they had been doing data and analytics for a decade or more their biggest challenges were twofold: 1) “Single-customer-view” and 2) making the analyst and their insights more useful and embedded into the decision making of the organisation.

Obtaining and maintaining one unique ID per individual customer was challenged by the traditionally siloed product divisions of the organisation, mergers and acquisitions, or simply the multi-channel, multi-device engagement of a customer with the organisation. Those organisations that didn’t have to deal with legacy systems and technologies first clearly had an advantage over their competition. Yet for most organisations merging databases and records became a 3-5+ year mission. And in a way, of course, this never stops.

Getting value from analytics

The second problem – gaining more value from the analysts and their insights – was just as complex.

Where should they sit? It took a while for organisations to move their newly focused customer analysts out of Risk and Finance functions, and closer to their Marketing and Product functions. Executives didn’t quite know what to do with these silent ‘mathemagicians’ or the reports they produced.

What do they mean? It was a problem of translation that cut both ways. Be it describing the commercial problems (e.g. customer churn) and translating it into analytics use stories. Or, developing relevant models and triggers, and then translating these analytical insights back to the business to take action. 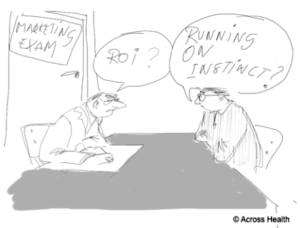 ROI – Running On Instinct? Marketing and Product were meant to base their decisions on evidence, and prove the ROI of their campaigns and changes. But because of the aforementioned data and translation issues, they kept on following their gut feel for a little while longer.

We get our own! With Digital it was a different story. Digital was all new and asked to prove it was worth the investment in traditional metrics. Yet again, with the data issues mentioned earlier (e.g. is Arthur J Miller the same person as AJ Miller), how were they meant to show that they were acquiring true new customers or had increased engagement with existing customers? In fact, many feared they’d be chastised for cannibalizing the traditional channels closer to the hearts of top management. Hence Digital often went and got their own databases and analysts and dashboards.

Many of the organisations I used to work with have now matured and embedded the fundamental building blocks of their data analytics functions. And they have identified the data and analytics they need to focus on so the business can achieve its strategic goals. In many cases, this may include sophisticated machine learning techniques, right at the top of the maturity curve.

The unfair advantage! Smaller, more dynamic or new organisations seem to have had the advantage to become analytics leaders. Many started the function by creating multi-channel databases and a thought-out data governance and analytics operating model. Nonetheless important they also showed a lot of vision about how analytics can advance their growth, customer experience and innovation.

In response to my last blog, I was asked: Where does my own company Ambercite stand? I would like to say our analytics and vision are leading the field >> very mature. And we had the unfair advantage of latecomers as described above. However, when it comes to data we struggle just like our competitors. Collecting millions of patent data points from disparate, century-old data sources around the world some days feel like living in a 1960’s James Bond movie. Think microfilm!